Social media: why employee advocacy is more important than ever 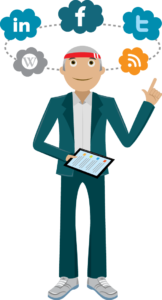 The past few months have forced us all to re-evaluate our lives at home, at work and beyond. We’re spending more time on video calls, sharing more on social media and taking greater advantage of online learning to expand our skills. So it’s no surprise that we’ve seen a big uptick in messages from clients wanting to boost their online presence, not least on social media. Requests vary, but most want to elevate their corporate accounts, especially the number of followers and engagement levels on Twitter and LinkedIn.

During the audit we also look at the personal profiles of the leadership team. That’s when my jaw often hits the ground. A typical CEO has thousands of followers. Thousands! Even when their profile is incomplete. Some even lack a portrait photograph. Impressive? Yes, except that most organisations fail to take advantage of the opportunity. The skill is to turn these passive LinkedIn connections into active networks that promote the business, its offering and the people who make it possible.

With a little more time I usually find at least half-a-dozen employees (at all levels) who are active on social media in a professional capacity. They post and engage regularly, sometimes about their employer, more often about what fascinates them in their industry. Bringing these people into the mix is vital too. By the way, I’m not arguing against having stand-out corporate social media accounts. They matter enormously for the credibility of your business.

The trick is to combine both personal and corporate networks in a virtuous circle that boosts followers, engagement and inbound enquiries.

With one client we assembled and trained an employee advocacy team of 50 people, including the CEO, who were active on LinkedIn and Twitter. Some had thousands of followers, some had hundreds. But with the right training, they became enthusiastic participants, with some even reaching ‘influencer’ status in their industry. At the same time, the number of corporate account followers on Twitter grew from 800 to 7,000 and on LinkedIn from 12,000 to 75,000. The engagement uptick was equally positive. This growth was entirely organic, by the way. We didn’t pay a penny to advertise for followers or sponsor external influencers.

You need to put a plan and a consistent resource in place to generate momentum on social media. Put it another way: there are no shortcuts, but there is a direct route to social engagement and leads, and we can show you where it lies.

If you’d like to find out more about how we can support your corporate and employee advocacy social media networks, get in touch with me: peter@commscrowd.com or connect with me on LinkedIn.